What Would You Do? Relapse and Birthdays… 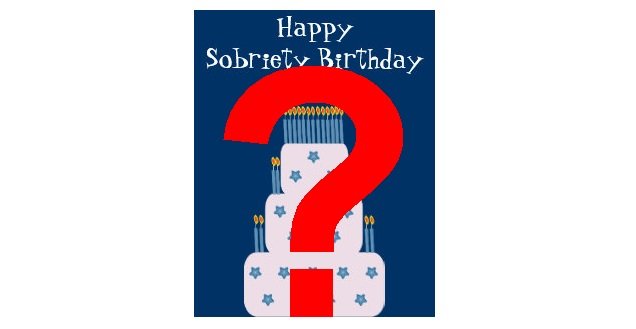 I sponsor someone who got sober in her 70’s. She reached 5 years of sobriety and, like so many around that particular year, she drank.

Prior to that drink, she met with me weekly and we had gone through all twelve Steps, and went back to each Step, as needed. She sponsored others and was involved in service work. She was going to meetings. She was reading/studying multiple Program books. She got angry about something one day. She made a plan to drink. She bought a bottle of alcohol. She did not drink the whole thing. She stopped after getting “tipsy”. She didn’t like the feeling. The entire “incident” lasted about 6 hours (I think).

The next day, she gave the bottle with the remaining alcohol to her adult daughter. She called me and met with me. She went to a meeting and announced that she drank. She immediately went back to her prior routine of meetings, service work, Steps, etc. That a little over a year ago. And yes, I received her permission to write this story in hopes that it would help others.

I was in shock. Horrified. Angry. Confused. Sad. And, more than anything, relieved that she was safe and came right back to sobriety. I poked and prodded the hell out of her to try and find out what could have possibly led her to drink! Of course the answer was the same as it is with any relapse:

After I made sure she didn’t have some kind of mini-stroke or brain infarction that would cause her to LOSE HER FUCKING MIND and do this, I asked if she ever considered calling me – or anyone – before taking that first drink. She’s an intelligent, hard-as-nails woman who doesn’t take shit from anyone. She looked me dead in the eye without hesitation and said,”Why in the hell would I do that? I wanted to drink?” She said she was pissed, and when she was pissed and set her mind to do something, there was no getting in her way.

(Alrighty then. I knew what work we were going to be doing next…6th and 7th…here we come!)

The thing that pissed her off isn’t relevant to this post. The thing I really want to focus on is what happened next…  Something that I had never experienced in my years of sobriety and has caused me and others I know some great consternation, hesitation, and reflection. Something that I hope you will consider and that will hopefully help you or someone you know who is struggling right now with a relapse…

My sponsee decided not to start her sobriety time over again.

I was given all kinds of advice about how I should handle this. I was told I don’t get to make decisions about another person’s drinking and what they decide to do about it. I was also told that I should “fire” her as my sponsee and should tell her “she doesn’t get to sponsor others”. I should also tell her that “only years of continuous sobriety count” in order to keep her 5 year coin and that she has to “start her sober time all over again”.

I prayed for her. I prayed for guidance. I thought about the advice from others. I looked in all the books to see what they said about relapse, birthdays, coins, continuous sobriety, “firing” sponsees, sponsorship. Go ahead…look those up.  I would love to know what you think and what you would do…if you were her…if you were me.

What happened next is why I continue to keep attending meetings, praying to a power greater than me (which I choose to call Love), listening to you, working with new people, and LOVING my sober life…

She sat in front of me telling me what she had learned from our time together AND from that drink. She didn’t like the drink, but she LOVED the 5 years and everything and everyone she had gained. Most importantly, she told me she didn’t care about the birthdays, or the coins, or the time. She said she didn’t want to celebrate those anymore. She told me the relapse (and her age) taught her to celebrate each DAY she had sober instead of each YEAR. She went on to say that she didn’t think she’d be alive much longer so thinking she’d get to another sober birthday was a dumb idea anyway! (I personally feel she’s so fucking tough she’ll live to 120!  When I tell her that she says, “Then, I’ll string together a lot of days.”)

She just doesn’t give a shit about the birthdays and coins…at all.

So, she continues to keep doing all the things she was doing before she drank. And, every day she wakes up praying for help and ending with gratitude for the day. She has no desire to drink. That is why she continues to enter the Rooms and do the work of helping others…helping me.

I thought her newfound belief of not wanting to celebrate ANY birthdays might change as her next-first-sober birthday approached, so I checked back in to see how she was doing at one of our (continuing) weekly meetings. Nothing had changed. She said that she would prefer that it be treated like any other day.

Sure enough, she is still grateful to have the Program and all of us, and grateful to be sober…today.

So…what would you do?