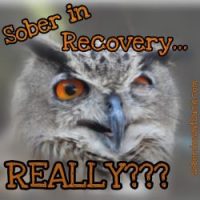 So, pot is legal where I live now.

Now, I am meeting people in recovery who smoke pot on a daily basis and say they are sober. This leaves me feeling…

I am now officially “old school” and considered an “old timer” in this whole recovery thing. I look at the younger people coming into recovery and what they are experiencing and I want to hear EVERYTHING!

What did they go through?

What the fuck is “Clone”?

And I ask every one of them, “Do you think smoking pot every day means you are sober?”

I am AMAZED at their responses! Out of the 6 people I asked, 4 people said NO and 2 people said yes. Wow.

These are a mix of young (under 30) and older (over 50) people. They all have less than a year in recovery.

When I asked another group of people like me – who have over 20 years of sobriety – they all say that smoking pot on a daily basis is NOT sobriety.

Here’s the GAME CHANGER: I asked all of those same people the following: “What if the pot smokers have a medical marijuana card and are being prescribed that pot by a doctor?”

This was the look I would usually get…

Of course the younger, newer-to-sobriety people knew exactly what I was talking about. They are the “opiate generation”. They know that being prescribed addictive medications is part of going to the doctor and it’s not a big deal.

The older people, the ones who have been sober for awhile are shocked by this concept. In fact, they are disgusted! So I ask them, “What happens when you have surgery? You’re prescribed painkillers, right?” Yes, but only a few…for a limited amount of time. And, a trusted friend doles them out. AND, the intake is monitored. AND, this is completely different from POT (they said)!

First, I want to say that the topic of this post is very different than the one I wrote about in my previous post Meds vs. Drugs in Sobriety.  That post was about REQUIRED, non-addictive medications people HAVE TO take in order to survive (e.g.- Insulin for diabetes or antidepressants for depression).

Second, while the drugs I am talking about in this post are prescribed and deemed critical by both patient and doctor, whether or not the patient would “survive” without them is questionable by many people. Also, the medications being discussed in this post are addictive.

For example: I know people in recovery with Multiple Sclerosis, arthritis, or cancer so bad that they are in pain all day, every day. Which would be better for them to have: A prescription for pain pills or a prescription for pot? Neither? Both? Would they lose their sobriety if they took these addictive drugs on a daily basis? Who makes that decision?

Some people say that you are not sober if you smoke cigarettes, or ingest coffee, or sugar, or Kambucha, or micro doses of mushrooms (which is also a new thing), or CBD, or ANY caffeine/mood altering chemical…including soda.

What about the people who are taking the drugs listed below during in-patient treatment – while they attend NA or AA meetings and out-patient Programs – in order to wean off of opiates, meth, and/or heroin?

These treatments are doctor-prescribed addictive drugs. Yet, without them, the success rate of people coming off the more addictive drugs is little to none. And, staying on those stronger drugs leads to suicide, expensive medical costs to our society, safety concerns to our communities, the spreading of diseases, and COMPLETELY avoidable deaths to countless many.

In the program of Alcoholics Anonymous, their Third Tradition says, “The only requirement for membership is a desire to stop drinking.”

In the program of Narcotics Anonymous, their Third Tradition says, “The only requirement for membership is a desire to stop using.”

Some may say I have entered a philosophical debate here. And yet I KNOW people who are facing these exact questions right now in their recovery. I have had to work through these with people I sponsor. People who genuinely want to get and stay sober. They want a new life. They want to clean the wreckage of their pasts, have a spiritual experience (if they haven’t already had one), and help others.

Isn’t that what recovery is really all about??

I don’t want to work with anyone who is “high”. I don’t know how to do that. If I see someone “using” ANYTHING (e.g. – Guys, gambling, pot/THC, etc.) to escape the stuff they don’t want to deal with in their lives, then I point them to a Program and outside help that can assist them with that. I let them know what I’m here for and that I cannot help them with that other stuff. If they want help with what I CAN help them with, then I give them the “simple tools that were laid at my feet”. If they are willing and able, then I’ll be right there with them…all the way!

If they tell me their doctor is prescribing them addictive medications for their ailments, then I can only suggest talking to their doctor about non-addictive alternatives. (Keeping in mind that I have NO control over this and I have NO business getting between a doctor and their patient!)

I DO have control over meeting with someone who is on anything that I believe is altering their behavior when they’re with me. I don’t have to meet with them…and I won’t.

Here’s the deal. People who truly do not want sobriety and are playing with all that addictive shit aren’t going to stick around for the work of recovery for long. Their addictive games, lying, and schemes can only go on for so long. They’ll bounce once they’ve worked their way through enough people, meetings, places, and things.

What I get to do in the meantime is pray for them and remain available for when they are ready, willing, and able to do this recovery deal.

I can only hope they are among the lucky ones who are blessed to have this amazing, beautiful sober life.