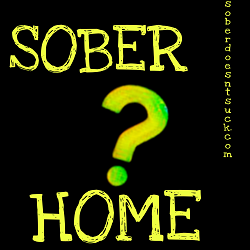 Before I got sober, if someone had asked me where my home was, I would have given them the address to one of the houses I lived in as a kid. It never occured to me that the definition of the word was a moving target and that I would one day come to find a new definition for myself.

I was naive and sheltered in a lot of ways.

Similarly, when I was a child, I thought my family and friends would always be there and that the problems we had were the same kind of problems everybody had. As I got older and the secrets started piling up, I saw that my family was a lot different from other families and that the things happening to me were not happening to my friends. I started to seriously question the whole idea of what a family was, who my friends really were, and if I wanted to be in this place called “home”.

The first time I remember running away from home was at 3 years-old. I wandered off and some VERY kind strangers got me “home”.

The second time I “got lost” was when a neighborhood boy and I decided to go looking for the ice cream truck. We heard its music and were convinced it was only a block away. It wasn’t. I remember ending up at some stranger’s house. They called the cops and the cops took us home. Next thing I know, my sister is sitting me down and letting me have it because she was so worried about me. She made me promise to never do that again. I was 5.

My next wandering off adventure involved a Sears department store. I believe I was 6 or so. I remember the kind man in the raincoat with the wool fedora who walked me to the mall security office when I started screaming my head off because I realized I was lost. It took a long time for my mother and brother to find me because it was an outdoor mall and I was in an office outside of the Sears.

Finally, there was the time I LEFT A NOTE telling my parents exactly where I was going and when I would be back. I was 17. THEY counted this as running away and grounded me for the full 2 months of my summer vacation. They actually thought this would DETER me from acting out. Their overreaction only pushed me much farther away. Further away from them…and “home”.

I don’t know if it was because I was the youngest and saw each of my 5 siblings leave the house one by one before me; or because I myself became skilled at getting away from the house starting at a young age; or because of all the horrible things that were happening in my house; or because I lived in three different houses growing up; all I know is that the idea of “home” was always a struggle for me.

Then, my husband and I moved across the country, far from the town where I grew up and the town where I went to high school. My family was scattered about, so I was far away from them, as well. The hardest part of the move was leaving my nieces and nephews, the few family members I was close to, and ALL of the friends in recovery that I had grown to love and depend on. I didn’t know what it was going to be like leaving the only “home” I had ever known. I had the beginnings of a “Sober Home” in Illinois and I didn’t know if I’d ever be able to recreate something like that in Washington.

For several years after moving, I would tell people I was “going home” whenever I would fly back to Illinois. It was hard to establish new roots, even though I became active in the recovery community and got a new job. My anxiety took over as did my difficulty with trusting new people. It didn’t help that I moved from a major metropolitan area to a very small, rural area. While I welcomed the change, it was also a culture shock!

It wasn’t until years later, after my husband had gone through a significant health crisis and I saw the amazing support system that surrounded us, that I realized I no longer referred to Illinois as “home”. In fact, I started to understand that “home” was no longer just a house, a state, or a town.

To me, a “Sober Home” is the place where I feel safest. This is where I can:

Based on this list, I am immensely grateful to say I have found a “Sober Home” with my husband.

Just like an actual house, building a lasting and true “Sober Home” does NOT come easy and takes A LOT of patience, communication, honesty, and Love to maintain. They are strong and fragile at the same time.

Then only wolf who can blow this house down is me.

In closing… I just got back from a trip to Illinois. This is after moving from there 20 years ago. The ghosts are mostly silent and I avoided the usual triggers. I didn’t see my abuser and I spent time with some of the people I am closest to in this world. I’m surprised by how sad I feel. It’s still hard to leave those I love behind in order to take care of myself.

At least I feel better knowing I’m doing this in order to live in my Sober Home.

I hope you will find the same, if you haven’t already.