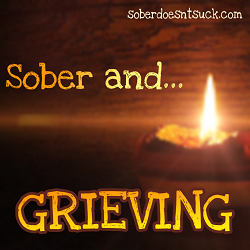 Have you ever lost someone? A friendship? A pet? Were these losses the result of a death or a break-up? As it turns out…loss is loss. Grieving can come after many types of loss…not just death. Loss of a job, relationship, or even loss of an addiction is enough to trigger the stages of grieving. And, each new loss can pile onto the pain from the loss before it. I learned all sorts of things like this each time I’ve been Sober and Grieving.

I would have to say my first major loss in my sobriety was alcohol. It had been there when no one and nothing else had been. It even took the place of food! I depended on alcohol to make me feel confident, social, sexy, and relaxed. It was my best friend when (I believed) no one around me could be trusted. Sure, it let me down a few times…but I didn’t expect perfection! At least, that’s what I believed…until I hit my bottom. When I realized that alcohol couldn’t be the “friend” I needed anymore. This made me very seriously depressed. I couldn’t believe that I wouldn’t be able to trust it anymore. How was I going to survive without alcohol!?! It had been there for me since I was a kid.

Other major losses I’ve grieved in my sobriety include the death of my brother (which I touched on in my post Sober Day); getting fired from my last job (Sober and Fired, Part 2); the sudden and horrific loss of our Bernese Mountain Dog (Ben) to bloat; the end of several friendships from my drinking days when I decided to get sober; the natural deaths of 1 dog and 2 cats; the relapsing deaths of people I have known in recovery; severed relationships with family members when I came forward about my mother/abuser; and – recently – a sober friendship of 20 years with a woman I never thought I would lose. (I still don’t know why I lost her).

Very well-intentioned people immediately wanted to say and do all the right things to make my grieving  better/go away. I had more books, prayers, and advice given to me than I could ever mention here. I am eternally grateful for this outpouring of Love and support. It has kept me sober and alive.

In the midst of all that giving, I was taught about The 5 stages of Grieving (by Elisabeth Kubler-Ross) They are as follows: 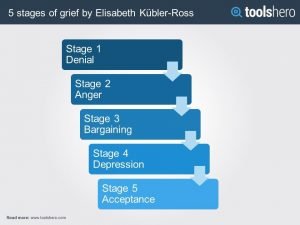 At least for me, these Stages did not happen in such a linear fashion. These emotions/reactions (Stages) would sometimes all happen at the same time or would come and go within the same day. Just like with my recovery from addictions, the grieving process is…messy.

I have always wanted to add a couple more Stages, as well. For example:

Here are some of the other reactions that I have had when I was Sober and Grieving:

I don’t know about you, but these behaviors are ALL indicative of someone new to recovery as well. So, it makes sense that someone in new sobriety could actually be compared to someone who is grieving. Only in early recovery we were grieving the loss of our drink, drug, food, lifestyle, etc. that contributed to our illness.

Just today, I received a call from one of my “sober sisters” who told me that her dog – whom my husband and I watched/fell in love with while our friend was in treatment many years ago and have continued to love ever since – died suddenly. I cried with my friend and cried when I hung up the phone. Then, I decided to finish this blog post, that I’ve been putting off for months.

It’s helped me to write this and remember that all of these feelings are important TO FEEL. Belittling them because they are about a dog isn’t going to make them go away. They’ll just go inside and fester. When my feelings fester for too long, they have a way of coming out later in all sorts of negative behaviors/bad choices.

It’s best to just go through the feelings now instead of “using” over them later.

If I were using during all of these losses, I may not have felt the pain during or immediately after each loss, but, I would have eventually… THAT is for sure. Even more important is knowing that I would have missed all the LOVE coming to me, if I were using. Yes…that’s right…the LOVE. That’s because, for me, each one of these losses came with all of those very well-intentioned people and their books, prayers, advice, food, and support.

The worst of times can bring out the very best in others; show us who our true friends and family are; and teach us what LOVE is.

So, when you go through your first loss in recovery – which includes your drug of choice – I hope I can offer you this small nugget of hope: Through your pain, past the tears in your eyes, please reach out to the hands that are there to pull you out of your grieving. Then, you will find what I have come to learn…Loss does not have to end you or your sobriety, and Love will heal you in time.