The Gift of Presence

I grew up in a lower middle-class family, the youngest of three.  I’ve often heard tales of terrible home situations and domestic strife in meeting shares, but that is not my story.  My older brothers often got into trouble growing up, so by the time I came around, I fell into the role of “the golden child.”  With my reserved and sensitive nature, I was a good student and a good girl, by all accounts.  My struggle was internal.  Kids can be mean, and they target the sensitive.  I was bullied in grade school, and became anxious about going to school, and anxious in general.  I was “different” in my family, then “different” in school.  I had a sense of feeling alone in the world.  This is a feeling that many alcoholics identify with, and that sense of being different becomes a hole we seek to fill.

I would eventually begin to fill that hole with alcohol.  This was not until after I had accumulated years of sometimes paralyzing anxiety.  Sometimes I wouldn’t sleep at all at night, fearful about what might happen in school the following day.  My active brain also invented theoretical scenarios in which I had a disease I had learned about in school or on TV.  I think they call it “Medical Students’ Disease,” where the intern thinks they are experiencing symptoms of the disease they are studying.  I remember watching a segment about leprosy on 60 Minutes with my family, and I was convinced I had it, and would soon be forced into a leper colony.  This was a stressful reality for a child.  I discovered alcohol and it quieted my brain.  And it was fun…fun for a long time.  College was a great experience for me, partly because I had become this new extroverted version of myself.   It started to not be so fun when I began to drink alcoholically.  Still the good girl and student, I drank before situations that would cause me anxiety, such as class presentations.  After a presentation of what was essentially my thesis, given to the entire department in grad school, I spent hours in a bathroom stall dry heaving, too sick to walk back to the dorm.

It scared me then, this alcoholic drinking, so much so that I took myself to a psychiatrist in hopes of a magic pill that would cure whatever was ailing me—fill this hole.  The magic pill prescribed to me was a benzodiazepine, and thus began my love affair with Klonopin (clonazepam) for almost two decades.  I began taking it shortly after meeting my now husband.  I met up with him late Sunday after a weekend of visiting my out-of-town college friend, and I remember having difficulty making conversation and walking.  He would later tell me he thought I had had a stroke.  We would go on to marry and have three children, and Klonopin dulled the pain of daily living.  I chose to stay at home with the kids when they were young, and that was isolating.  Sedatives helped me get through the day.  My psychiatrist continued to prescribe them, even upping the dosage, until I had to supplement with alcohol because it just wasn’t enough.

For many years I went through the motions of living.  I remember looking at the clock at 11 am every day, having survived an exhaustingly long morning entertaining toddlers, and thinking, “It’s only fucking 11!  There are a lot of hours left in the day.”  The pills and alcohol made it tolerable, but I was not really there.  I recently saw a video of me with my girls and  toddler son, and it saddened me to see the heavy mom, with the slow speech and strange affect.  One morning in July of 2013, I sat on my bathroom floor contemplating life without my pills, that I was now getting illegally, and I didn’t think I could face the day.  My husband came in, and I remember him telling me, “Why would you want to go through life in a haze, anyway?”  I didn’t, but I didn’t know how I was going to live a life without my magic pills.  That was my bottom.  It was knowing I couldn’t continue living in my addiction.  I had to surrender the uncertainty and fear of living sober to my Higher Power. 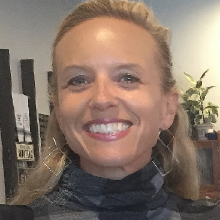 I spent the last weekend of my active addiction driving my daughter to summer camp in rural Illinois with another mom.  It was ridiculously hot and miserable as we put the mosquito netting up in Maddie’s cabin, and I was anxious coming off of my meds.  What will life look like now?  Resigned to my situation, I put one foot in front of the other during my days in new sobriety.   And each day that passed…was okay.  It was surprisingly okay.  I made sure to continue to take care of myself and work the necessary steps—this for me including running, appointments with my new, wonderful therapist, regular AA meetings, checking in with my sponsor, and working the steps.  My husband entered the program two years after me, and our relationship has gotten very strong.  It’s surprisingly easy for two people, trying to be of service to others, to be kind to one another.

Life is good now.  I am living the life I could only dream of when I was an active alcoholic.  I am a working professional, volunteer at the county jail, am presently getting my clinical doctorate, and my children are thriving.  Life is also hard, but I no longer wish to self-medicate to get through the hard.  It is often in the hard moments that we experience beauty.  The program of Alcoholics Anonymous has given my many things–a skill set to live life, a community of fellows, support when I need it, and finally the gift of presence.

I have been featured in the Grapevine, and I very recently started my own blog:
https://www.grapevine.org/magazine/2020/mar/thank-you-ladies
https://aathursdays.wordpress.com/2020/04/12/welcome-to-aathursdays/