But wait… I’m not supposed to talk about that. Not HERE. This site is about RECOVERY…NOT politics.

Well, that’s what I’ve been taught in my recovery.     How about you?

It’s also been suggested to me that I not discuss religion or money in the Rooms or online recovery groups.

Well shit. Aren’t these REALLY IMPORTANT topics in my life that could deeply affect my recovery?? What if I need to talk about these at meetings in order to stay sober??? Not to mention…I’ve been really, really, REALLY pissed off about all of these and a drink or drug could really make it easier to deal with all of it…  Right? (You may be thinking.)

I looked to see what some books might say and I actually found something! I’m pulling from just ONE of the recovery programs here…  In the Big Book of Alcoholics Anonymous on page 176 it states:

“Never since it began has Alcoholics Anonymous been divided by a major controversial issue. Nor has our fellowship ever publicly taken sides on any question in an embattled world. This, however, has been no earned virtue. It could almost be said we were born with it, for, as one oldtimer recently declared, “Practically never have I heard a heated religious, political, or reform argument among A.A. members. So long as we don’t argue these matters privately, it’s a cinch we never shall publicly.”

In addition, several “Anonymous” Programs have a Tenth Tradition just like A.A.’s, which states: “Alcoholics Anonymous has no opinion on outside issues; hence the A.A. name ought never be drawn into public controversy.”

I have heard people in recovery meetings, online recovery groups, and even my FRIENDS in recovery say things about who they voted for or how they feel about some religious thing and what they think we all should do in the next election, etc. and I have finally learned to KEEP MY MOUTH SHUT!

Because, in the end, that’s all I would be doing. I would be shoving my beliefs on them the way they shoved their beliefs on me. Did I like that person going on about their political and religious views and what we all should do about it? NO! Would they like me doing that to them? NO! Would either of our beliefs be changed in this exchange? NO! Why not? Because neither of us invited this discussion. Neither of us wanted to hear it. Neither of us were prepared for it. Neither of us were open to it. And now, we’re both pissed off and more resistant than ever!!!  If anything, we’re going to be even MORE against each other’s point of view in the future!

In a lot of ways, I see what I’ve learned in recovery as a way to be in the world right now. It’s like a safe bubble that I can choose to go 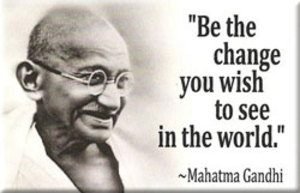 into and practice the principals I want to use in the world. And trust me…I’ve been offered A LOT of opportunities for practice lately!

With each new political, religious, financial piece of news I hear that offers me a good dose of fear, insecurity, and/or anger, I get an opportunity to “practice these principals in all my affairs”, meditate, listen, get right-sized, ask for help, get REAL humble, pray for the people I do NOT want to pray for, and FOCUS ON GRATITUDE and all the beauty in the world.

Because…when it comes right down to it…I’m sober today and THAT is a FUCKING MIRACLE.

Thank you for joining me. Take care.  With Love.