My husband and I were driving home from a gorgeous day of sailing with my sponsor. He was in the car in front of me and was pulling up to a 4-way stop. I was about 20 yards behind him. I saw a car coming out of the intersection to our left going about 40 miles an hour. It didn’t stop at the stop sign. It bowed WAY OUT into the intersection and…

DROVE OVER MY HUSBAND’S CAR!! 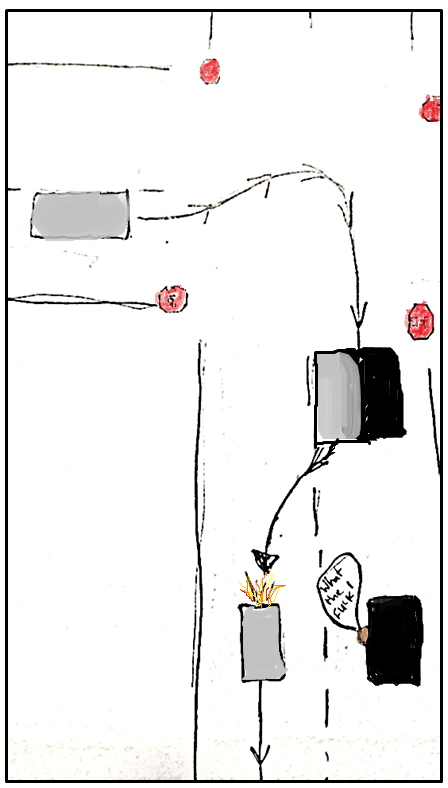 Then, without slowing down AT ALL, it slammed back down onto all four of it’s tires next to my car and JUST KEPT GOING while sparks shot out of the bottom!! When I saw that it wasn’t pulling over, I began screaming out of my car at the top of my lungs. My next immediate thought was that my husband was dead or in critical condition. I just saw a car drive over him!

I raced to his car screaming and crying. My phone in hand calling 911.

In fact, I was more of a basket case than him! His car was completely crushed on the entire left side EXCEPT for the area JUST ABOVE his head (including the driver’s side window). How is that possible? What are the odds?

When you’ve been around the rooms of recovery programs as long as I’ve been, you’ve seen MANY “miracles” like this. There’s Mike M. who was a “garbage can” addict for 40 years. He put anything and everything in his body. Drove into a street pole, knocked it down, and walked away. (You can find out more about him on the Tell Us Your Story Page.)

Or, there was the woman (I’m sorry I don’t remember her name) who spoke at the Seaside, OR It’s a She Thang Conference some years back. She stood in front of over 500 women and told the story about the time she was drinking with her friends at the beach and she neglected to watch her children. One of them, her toddler daughter, drowned that day. She was able to get and stay sober for many years after that. Hell, she even went around to conferences telling the story! THAT is a miracle.

So sure, I could watch a car drive over my husband’s car and drive away, with my husband unscathed. That’s some crazy shit. But that kind of crazy shit happens every day.

The cops didn’t help at all. NOT ONE BIT. My husband picked up the pieces from the other car and took them with him. He took pictures of them and posted them online. People started giving him some tips. After a couple months, and some other details, my husband found the guy. Here’s the part I really want you to know…

The guy is a drunk. A drunk who has lost his wife and kids and the respect of his friends. He’s about to lose his job and his house. That car is duct taped together. He can’t afford to get it repaired and – of course – he can’t report it to his insurance. The second he does, they are going to go after him because my husband’s insurance has gone after his. He’s been a blackout drinker for awhile now. Since his wife left, he’s gotten much worse.

But how do I know all of this?

As it turns out, my husband (unknowingly) ended up telling his story to the woman who hosted the party where our drunk driver got hammered that night. She told him that while she was going to get her husband to stop the drunk driver from leaving the party, he left the party. She said she felt bad that he left drunk. BUT, she didn’t want to get involved as a witness to the cops. She said she was sorry she let him leave the party drunk.

Those are the facts.

I can tell you that my anger ended far quicker than my husband’s. I’d like to think this is because I work a spiritual program AND DIDN’T HAVE A CAR RUN OVER ME! His anger was toward the drunk driver. He kept saying over and over, “What if my car was a child? Or a pedestrian? Or, his wheels HAD landed on my door instead of the side panel? What if NEXT TIME he actually kills someone and the cops could have prevented it???”

My anger was toward the adults in their 60’s who let another adult in his 60’s leave a party drunk and drive home.

It really got me thinking… How many ADULTS out there are letting their friends drive home after they’ve had too much to drink because they are too embarrassed or weak to confront them and take away their keys? We expect KIDS to do this – even with all of the peer pressure they are under, but how many adults REALLY will do it? REALLY?

The holidays are here. If you see someone who seems tipsy at a party – whether they are your friend or not – would you confront them and ask for their keys? Would you ask them not to drink? How would you handle a situation where you felt like someone had too much to drink and you didn’t think they should drive home?

Think if they had driven and killed your child, your wife, your dog…my husband…

Please think about how you’re going to handle YOUR drunk driver.